The subject of this blog may come as a surprise to many of you – after all, I have just spent three years in one of the cities where rowing is most popular (Cambridge) without ever showing any interest in taking part in the sport. The reason I was not interested in rowing while in Cambridge is that I was totally committed to my running. However, I have not run for more than c.10 minutes since early December 2015. I am gradually managing to increase the amount I am running but not enough to satisfy my need for exercise. I have been going to the gym and swimming but frankly I was really missing doing sport with other people. This led to me seeking sports that did not require any running. I have tried out a swimming club and a kayaking club, but so far rowing is my favourite!

Admittedly the erg machines are really boring, but actually being out on the river is great fun. I have been out twice, both times in a stable single (i.e. a scull but with floats attached to prevent me capsizing). My immediate reaction is that rowing is a lot harder than it looks! I have never been the most coordinated of people (hence why running suited me) and trying to get both blades to do the same thing at the same time is remarkably difficult. I am particularly bad at going in a straight line and always seem to be heading towards the middle of the river – at least I am not heading towards crashing into the bank! I also instinctively pull with my arms while pushing with my legs (for the uninitiated, this is wrong – you push with your legs and then pull with your arms!) However, after two hours of sculling I think I am beginning to get better. I am by no means consistent but I think it is fair to say that I am less inconsistent than before! 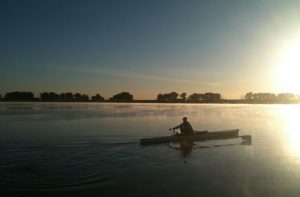 Yesterday morning was a beautiful sunny day and sculling along the river for an hour was wonderful, although I should have worn sunglasses against the reflection off the water. The hour passed very quickly and certainly good exercise. I was initially biking down to the rowing club but quickly discovered that a 45 bike ride, an hour of rowing, and then a 45 minute bike ride straight up hill left me with no energy for the afternoon! I was very glad of the car yesterday and had enough energy to go to the allotment in the afternoon.

The Wednesday morning rowing I have been attending is for adult beginners. It is my hope that in a few months time I can progress into the novice squad but we will have to wait and see. Running friends – don’t worry! I fully intend to return to running as soon as I can – but rowing is providing a very entertaining alternative and a chance to exercise with people, thus giving me the community side of sport that I have been missing.