With the celebration of Christ’s birthday over for another year many fridges will be groaning with leftovers and many waistbands will be a bit tighter than a week ago. For many people this leads to a New Year Resolution that involves exercising more. That is great but, as many people know, if the resolution to exercise several times a week makes it out of January then it is doing well. I think I have identified a contributing factor to this – for the majority of people their exercising is done in a gym. Please don’t misunderstand me – gyms can be very useful. The erg machine is an essential part of running training, the cross trainer can aid recovery from injury and doing weights can be helpful if you are looking to take your running to the next level. However there is one item of gym equipment I can see no use for and would be quite happy to ban, the treadmill!

Given I am a runner you may well be surprised to hear of my hatred for the treadmill but there are several reasons for my dislike of the machine. First, and most importantly, the treadmill is exceptionally boring to use! Over the last four and a half weeks injury has forced me into the gym to use the cross trainer and it is mind numbingly dull to stay in the same spot staring at the same patch of wall. Even if you are lucky enough to have a gym with a TV you can watch or you listen to music it is still so dull! Many of us have to spend 9-5 everyday staying in one place and staring at a computer screen – when your exercise is essentially the same thing but with added sweat and exhaustion it is no wonder people quickly give up! 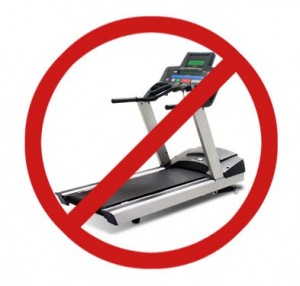 specially as gyms are often stuffy and you are frequently surrounded by other people. I know people often state that a gym is necessary because otherwise the dark, wind, rain etc would stop them going for a run. The dark really shouldn’t be an issue as there are so many well lit streets and cycle paths nowadays and if you join a running club then you can run with other people and learn the best routes. If you really can’t face running outside in bad weather then fine, use the treadmill
occasionally but try to keep the vast majority of your running outdoors. In any case, I personally running when the weather is bad only makes me feel more refreshed afterwards – it certainly blows away the cobwebs!

I also feel that it is necessary to point out that gym membership can be really quite expensive and that it is far cheaper to simply step outside of your front door. Running is one of the simplest and purest things you can do and by adding a gym and a machine into it you dilute the nature of the sport and therefore dilute the simple pleasure of putting one foot in front of the other.

Finally, if you are attempting to get quicker at running then a treadmill should be avoided at all cost. Running inside is so different to running outside that if you train predominantly on a treadmill you will not see the improvement you might do if you ran in the fresh air. If you are training for a half-marathon then the there is no way the treadmill can prepare you for the people, the weather, the hills and the corners that you will encounter. The same goes for cross country – you can’t practice running through mud when you are inside in the dry! If you only train on a treadmill you will probably end up with a false impression of how fast you can go because if you can run a 25 minute 5k on a treadmill then I bet you would find you run around 26 minutes outside. A treadmill is an artificial simulation of running and this can lead to disappointment in races and ultimately disillusionment with the sport. I know many people will argue that you can set a treadmill to different inclines and different speeds and therefore run an interval session on it but I firmly believe that you would get more benefit from doing the same thing outside!

My message is simple – exercising more is a great thing to do and I really encourage it but if you want to keep going and to maintain your enthusiasm then do not use a treadmill! It is boring, expensive and far less beneficial than running outside.

As you can probably tell from the length of this article, this is an issue I feel strongly about. However I reckon it is time for me to climb down from my soapbox and end this blog. See you all next time!

I am sorry that it has been such a long time since my last blog, I am sure you have all been waiting on the edge of your seats… (If there is anyone who is actually following this blog then please note that I have finally managed to enable subscriptions – if you want an email every time I blog then scroll down on the right hand side, click register and follow the instructions. Hopefully that should work!)

This blog is about what has kept me so preoccupied for nearly a month that I have not found the time to write anything – don’t worry I am not about to give you a lesson in Anglo-Saxon history (although I am always happy to do so J), this blog is about Varsity cross country!

For those who don’t know, Varsity is a yearly competition between the Cambridge University Hare and Hounds

(CUH&H) and Oxford University Cross Country Club (OUCCC). Besides the war years, the gentleman’s blues (first team) race has been held annually since 1880 and the ladies blues race began in 1975. This means that 2015 saw the 125th gentleman’s race and the 40th ladies race. The race is hosted by Thames Hare and Hounds around Wimbledon Common. If you want more information on the history of blues Varsity then have a look at Thames Hare and Hounds website – http://www.thameshareandhounds.org.uk/varsity_history.php.

However, the reason Varsity has kept me so occupied is that it is not just a one day event, the II’s-IV’s matches take place the weekend before blues with the location alternating between Cambridge and Oxford. The weekend of II’s-IV’s is perhaps the most important race of the year for most of CUH&H and OUCCC and this year it was hosted by Oxford at Shotover Country Park.

One of the things I love the most about cross country is that it really is for everyone. While there are 14 selected runners for the women and 24 for the men (these are selected following Cuppers two weeks before II’s-IV’s), the ladies III’s and men’s IV’s are open to everyone. These are known as the mob matches and, essentially, the more runners you have the better chance you have of winning!

Unfortunately the day of II’s-IV’s could have gone better with the Cambridge men losing all three matches. The Cambridge women fared better. They took the individual victory in the mob match and I was thrilled to watch the team win the race as well, a difficult accomplishment when you are away from home and therefore, almost automatically, have the smaller team. The real drama of the day came in the ladies II’s match. The front runner, a Cambridge girl, got lost on the course and, despite Cambridge still claiming 1st and 2nd, this altered the team result. CUH&H and OUCCC were unable to agree on what had caused this leading to the team result being nullified. Despite this it was a great day for CUH&H ladies. We came away with both individual victories, victory in the mob match and the knowledge that, had our front runner not got lost, we would have won the ladies II’s as well. 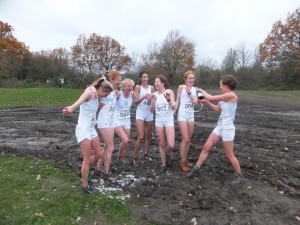 A week later it was time for blues Varsity. After the drama of the weekend before (and the navigational mishap in the ladies blues race in 2014) everyone wanted nothing more than for the race to go off smoothly. Thankfully it did – with about ten signs and three marshals at last year’s point of error there was absolutely no chance of a repeat. Unfortunately the Cambridge men lost out to very high quality Oxford team, giving Oxford the series lead as 63-62. However, I think it is fair to say that the Cambridge women dominated, getting all seven of their runners back before Oxford’s 3rd runner and claiming the individual victory! This closed the gap in the overall series to 23-17 in Oxford’s favour. I was a very happy captain that evening!

Varsity is strange, there is no other cross country event where there will be so few of you in the race and the competitive nature of sport gets to all of us. I don’t hate Oxford and have some very good friends there but, come Varsity, beating them is all that is on your mind. I suppose that it what comes from 135 years of one-on-one rivalry. I expect some people are already beginning to look forward to next year when Cambridge will hope to have strengthened its men’s side and will look to repeat the domination shown by the ladies this year.

Hopefully there will not be such a long gap to my next blog!